Appended to add: I am not for harassing or raping anyone and if you’re doing that you’re no friend of mine. That said, for all the ongoing and constant rapity rape rape rape  claims and overly sensitive threat assessment tactics from the delicate flowers of gamer feminism (or atheismplus) I’ve yet to see one actual police report in support (evidence?).  If there was one police report or actual attempted rape for every 50,000 words spewed by these WATB, it would be a different story.  I’m just dam tried of their grabbing the stage and using it to promote self serving balderdash.

Yesterday I reposted a comment on my blog that I had dropped on a website trumpeting an ability to mock and track the “new” misogyny!  I used the opportunity to express my thoughts on (the ginned up) “gamer gate” controversy.  It was received with the usual (expected) mix of ad hominem malarky and knee-jerk bile.  What the replies lacked in total were any honest attempts at refuting the issues I leveled. There were plenty of feminist keyboard warriors who found the time to partake in my metaphorical stoning while simultaneously love bombing each other. This is a technique borrowed from religious cults and bolsters the mind-lock within the clammy confines of their heavily bunkered internet silos.

This gamer-gate crap caught my eye because it’s impossible to miss the familiar echoes of the American Girlyban tactics and their so-called “atheism plus” Kool (aid) Kidz club.  This new breed (bastardization) of feminist atheist heroes continue to bleat out false molestation and rape charges against every top male skeptic on the planet!  They’ve already slimed Richard Dawkins, Michael Shermer, Lawrence Krauss as well as a whole host of lesser known skeptics within the rationalist community.  This has been accomplished with ZERO evidence of ANY police reports of rape or harassment at any skeptic or atheist event in all of recorded history!!  It’s a sorry testament to the ongoing uselessness of a growing cadre of sloppy, link-bait addicted internet media.

The only one they’ve missed is Stephen Hawking, and I’ve got my suspicions that they’re working up some kind of a pitch for Salon or Gawker on how his tilted head is just a ruse of his to sneak a better view under their sun dresses during interviews.

The comment I left at the website in question does deserve credit for actually allowing my comments through moderation.  That’s a tad refreshing, given the proclivity of the “New Misandrists” and their penchant for treating even the honest critics of extremist feminism with the same tact as Sarah Palin’s progeny treat birthday guests.  To wit:

For starters, the “Mocking Misogyny” crowd is so easy to mock simply because of entries with headlines like this:

That concludes with this:

Ms. Wu must have seen my mocking comment on her lack of backbone.  I’m glad Brianna is standing up to the freaks that are making anonymous potshots and threats against her.  I await a copy of the police report with any info which could help us track down these miscreants.  Now it’s my turn to respond to the useless crap her clown car of supporters have been up to.

I’m going to stifle my desire to put these responses into a slideshow carousel and present them in long form instead.  I’m sure the original comment thread has since ballooned with even more circle-jerkers patting each other on the back for their collective ‘wit’.  LOL.

Cloudiah: admitting that you’re not a good writer at the beginning of the comment and then pretending to be competent enough to critique one who surely is, seems an interesting character trait you apply to many other issues of which we are at odds. It’s unintentionally hilarious.  Perhaps you’d be a bigger fan of the the goatse boy remix on ‘deep and wide’ that I could have used instead?  I’m always open to suggestive criticism.

I answered hellkell directly on the “mocking new misogyny” website since it’s one of a number of ‘anonymous’ troll commenters.  If you don’t stand up for something you’ll bend over for anything.  Bend hellkell bend.

and then sat back and waited for the inevitable:

It would have been nice if the Policy of Madness (anonymous troll) had actually taken the time to quote-mine me improperly instead of just making shit up, but that’s the “new feminist norm“.  Once you’re admitted “I’m an idiot to think this is gonna be effective in moving our message forward” you’re already on the ground floor.  Please get back with me concerning honest ‘critique” if you find it amongst the dreck.  Smells of desperation. In the event it’s found that the inhalation of too much nail polish remover is the cause of your shared delusions, you’ll have my apology and full support in your lawsuits against Revlon.  Until then, just hold your breath.

I’ll give Fibinachi the credit for at least going thru the trouble of setting up an empty Wordpress site with the tagline, “Trolling for a living”.  Reading comprehension most certainly isn’t something I’d suggest Fib try as a career move.  I clearly picked a side on this issue, and it sure as hell wasn’t Fib’s, which I assume is what caused Fib to dress for ‘work’.  Not yet finished with “the job”, Fib continues: 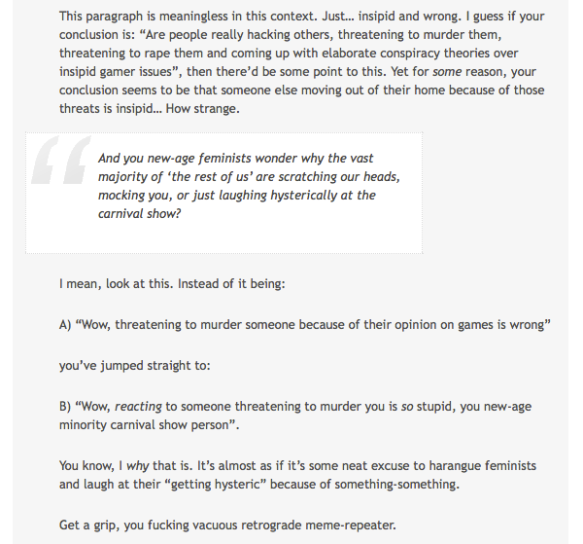 That’s a lot of piffle in an attempt to ignore the fact that feminist overreaction to online bullshit undermines whatever plausible rape or death threats actually exist.  Do you have a link to share which documents a police report on the alleged threats?  I suspect not since this “gate” is entirely like the atheism plus nonsense-gate where documentation was as hard to find as Baby Jeebus’ ancient ivory teething ring.

Offenses to my Gravitas

And finally, there’s this bit of ignorance from someone who has the temerity to ‘flex on me’ instead of actually checking on my truths of my claims of gravitas (and fabulosity).  It’s worth responding to as I slam the door on this gamer gate nonsense once and for all.  Or not.  My rules.

More men get shot to death by cops for refusing to give their phone numbers than women, which is a nice way of saying your anecdotal evidence isn’t relevant to this particular event.  I was a liberal atheist ‘shock jock’ on drive-time radio acting as the liberal foil on a Fox affiliated station in Jackson Mississippi.  I openly speculated on the sexuality of imaginary Jeebus, not to mention a plethora of other ‘scandalous’ subjects during my radio daze.  That’s the one that worried my wife the most, and it might have been the most high profile, depending on how you regard being the only white guy on an otherwise all Black campus at Jackson State University.  Not everybody there was particularly fond that my academic scholarship took up a spot for a ‘more deserving’ minority student.  Probably be a lot more difficult on a white guy down there post Ferguson Mississippi, but it wasn’t a cake walk back in mid nineties either.  Flex on me?  Don’t be silly.

4 thoughts on “Gaming the Gamergate GangSistas”