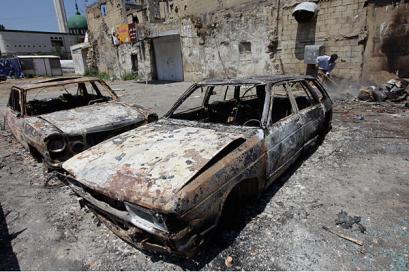 Even though most of the mideast reminds Obama of Detroit, that’s no excuse for intervention.  Let’s drop some jobs into Detroit instead of bombs on foreigners.

We have no business in Syria. None. Let them kill each other off on their own, and in whatever fashion suits them best. We have no friends over there. When you can’t even fool a drunken Brit into tagging along you know you have a problem. Time to defund the spies. The NSA seems extremely adept at accessing and cross-filing Grandma’s emails (lest the Gray Panthers get a toehold on society). It’s great that they’re keeping an eye on the proliferation of heavily sharpened knitting needles, but even more worrisome that they still can’t provide accurate, reliable real-time operational foreign intelligence.

Capturing small talk in the men’s loo at the UN? Easy Peezy.  Still totally clueless on any issue involving WMD’s.  Are you kidding me?

Obama finally decided to call off the Feds over Colorado, Washington and California marijuana legalization rulings. He left the door to fascism cracked open wide enough that the Prison Industrial Complex is still smiling.  No change to the federal classification aligning marijuana with heroin. In other “drug” news it was reported that 500 people die every year from Tylenol overdoses and 50 to 80 thousand seek emergency room services from negative reactions to acetaminophen.  This prompted a voluntary change in the label.  Glad that’s tended to.

With names like Incendiary Point and Hell’s Canyon it’s a wonder these places haven’t self immolated long ago.

The entire western half of the US appears to be on fire. Visitors to whatever is left of our western national park system should be required to carry portable firefighting gear on all future camping expeditions as well as pine seedlings to replant the blighted forests.

Ballmer quits at Microsoft. About dam time. Most of the American workforce would already have been pink-slipped for much less serious failures, like showing up to work an hour late because they had to take their sick child to the clinic. This clown should not have survived Vista, let alone the aborted Courier and the not aborted ZuneRT.

ItI won’t be long before everyone is wondering how they ever got along without a smart watch. Or not.  I have a hard time seeing the appeal so you know I’ll absolutely have to have one as soon as they come out.  In the end I think the eyeglass viewer is going to become the dominant smartphone interface, though the watches will probably sell well enough to gain a strong foothold.  Toughness and weather resistance is going to matter.

The Return of the Brick Phone

Those cute little smartphones we all took home as cuddly kittens are poised to grow as big as adult grizzlies. By the time the market fully matures the number one selling phone accessory is going to be a backpack to carry all your gear. It’ll be Phabulous.

Looking into the future of Google Glass I see a Sergei Brin divorce on the horizon.

Windows tablets continue to suck, at any price.

Nintendo just released a new hand held gaming device that doesn’t include a Twitter app or a phone. What the hell are they thinking?

PZ Myers has still not been formally banned from the internet and continues with his wild ass ruminations.

Everything continues to blossom in my world, even with the many burdens providence has seen fit to vex me with.  It won’t be long before we get to see the newest iteration of the iPhone, so reschedule that appointment you made with the Dutch euthanasia society.

There’s still something worth living for.