Not so long ago, Donald Trump was promising the American people ‘So Much Winning” that we’d get tired of all the winning.  The Dotard repeatedly told us all to be prepared for an amount of winning that would exceed that of even the estimable Charlie Sheen.  And before anybody asks, the answer is NO!,  I am not still upset about that failed job application I made to Team Sheen once upon a time.  You don’t take a chance you don’t stand a chance.

Once Trump started ripping Catholic babies off the bosoms of mothers named Maria and the so-called moral majority remained silent, it forever tainted the remains of the evangelical Christian Nationalists by highlighting that their morality is more suspect than Hannibal Lectors choice in diet,  I called that a win. Remember that once the Marmalade Colored Mussolini got into office, we weren’t five minutes into the actual Dotard Era before we were being intellectually assaulted by the ‘crowd size’ claims of Little Donnie, yet those with the most obvious exaltations against bearing false witness were, and still are, the most vociferous apologists for Trump.

From that point on, the majority of America not myopic or mentally different enough (Amen, Christians!) to accept faith over truth, immediately defined ‘Winning” as “Trump being unceremoniously exposed as a compromised Russian asset with a megalomaniacal attitude towards American justice, long standing tradition and the kind of good common sense our mama’s raised us with.

I’m told that the Psychic Friends Network Department at The Tim Channel feels the same towards Fox News and foresees that Sean Hannity is bound to end up being charged as an accessory.

What Have We Learned?

If you are determined to consort with hookers and decide to run for President, you have to own your debauchery.  Brag on it instead of being ashamed.  Have the hookers in the middle of your raucous crowds, waving banners and braggin’ about your ‘stamina’!!  Trump was just raised in the wrong epoch.  Trapped in an earlier era’s primitive advertising injunctions against evangelizing the benefits of libertine sexual expressions and afraid to confront the so-called moral majority he is beholden to.  In a much earlier era, perhaps the ‘conservative’ one he desires a return to, he could freely fuck his horse at or after an Emperor’s feast in front of the entire Senate and it’d hardly raise an eyebrow. You kinda have to pity a guy born so far after his time.

For at least the last year, there’s been so much winning in regard to exposing the obvious crimes noted above that’s we’re now at a point where indictments, convictions and pleas are falling faster than Monica Lewinsky’s panties ever could.  We just learned today that Trump paid at least a couple women hundreds of thousands of dollars to keep quiet about how far he had them pull down their panties!  We even know that The National Enquirer paid the hush money on the notification of his now convicted and imprisoned lawyer, Michael Cohen.  We know Trump is Individual 1.  Is this not a glorious holiday season!  Overwhelmed with the winning.

And that’s even before factoring in the extreme ‘winning’ that the “keep the hookers quiet during the election” side of the equation brought to the hullabaloo.  There is the entire “Butina just plead out” to funding the NRA thing. Pictures of her have been seen hanging on the office walls of off half of the Republicans in congress.  Same dudes we daily see masturbating over their God given right to own assault rifles (with extra capacity magazines), enhanced by the lingering scent of her perfume on their collars no doubt.  The NRA is going bankrupt, simultaneously at the time of the withdrawal of all that Russian laundered payola.  The National Russia Association is another victim of Trumpianism.  Like the Republican party itself.  Near bankrupt and not worth saving.  Never imagined I could win this big in my entire life.  That may be the only thing Trump actually ended up being honest about without knowing how much it’d end up biting him in the ass.

To my fellow Americans.  Actual people I know, as well as those of you who appear real to me by virtue of your social media signatures, take note.

Trump colluded with the Russians, using sophisticated marketing analysis of data obtained from Facebook to Soviet mind-f#ck tens of millions of Americans into voting for him.

It would probably have been 100 percent legal if he hadn’t employed the services of Russian hackers and saboteurs which is what really pisses him off.  He thinks he can hire and fire ANYBODY he dam well pleases dontchaknow?

It was effective with at least some small percent of the most gullible among us.  They’re not hard to spot.  It’s like a sad remake of the Heaven’s Gate “Away Team“. 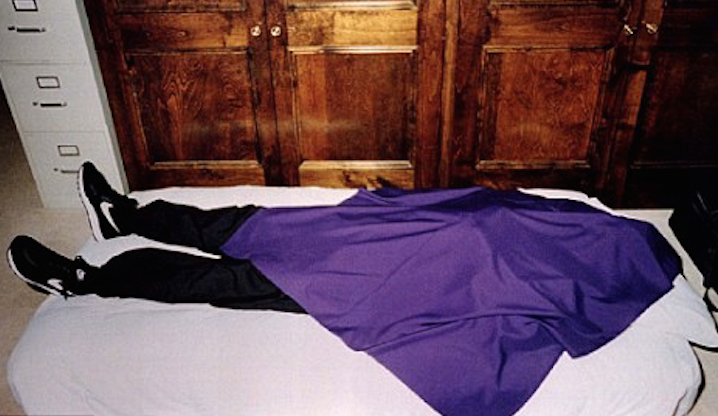 The Lazy Boyz Brigade (with Sean Hannity reprising the role of Marshall Applewhite), are eager to fall into full recline, consume the tainted Trump Steaks, tie a plastic bag full of Hillary’s stolen emails over their heads and then cover themselves with a purple MAGA blanket in anticipation of arrival at the Spaceship TruckNutz hiding behind the  Comet Hale-Bopp. where they will be be awarded with fifty virgin AR-15’s.

Having conclusively established evidence that you can fool some percent of the people all the time I still contend that Trump’s base numbers are as heavily inflated as both his ego and girth.

We’re being led to believe that Trump couldn’t shake off his supposed 33 percent of ‘core Republican supporters” even if he dug up the corpse of Reagan and shat all over it in a live pay per view TrumpTV event while Stormy Daniels, suspended from above, rained copious amounts of piss on his mangled mandarin mange.  And in an odd ‘Oh, by the way, which one’s Pink?” moment, his most solid support is reported to be among the most pious?

The acquisition of the data may very well have been a standard marketing transaction.  Selling your digital soul is what Facebook does that allows them to offer such fantastic ‘free’ services.

It’s all a part of that pesky Facebook TOS agreement being as least as difficult a legal quagmire as Trump’s side-whore confidentiality agreements.

Scientific application of that data, available to those with budgets far less grandiose and slightly less subversive than that of Soviet statecraft, can dramatically alter perceptions in ways that are academically demonstrable.

How in the bloody hell do you think diamonds became a girl’s best friend?

If you think Trump’s use of “FAKE” everything isn’t a calculated part of his Soviet funded propaganda campaign to overthrow America you probably already own the box set of purple MAGA blankets located amidst the stacks of old newspapers you’ve been hoarding since the late 1940’s.

These aren’t just the opinions of a modern day prophet living in his van up in the high mountain meadows, these are mainstream, four star general, certified American hero patriot facts. 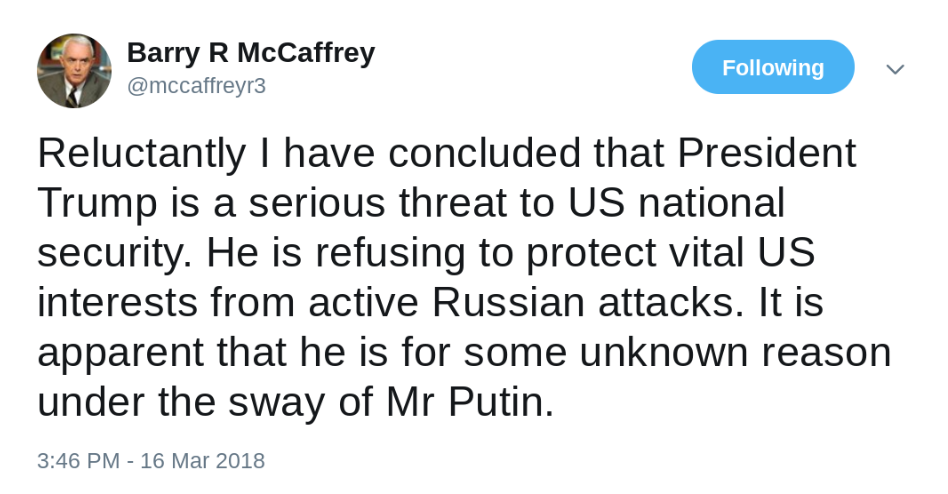 Dear Donnie, you can’t pretend to support the troops while simultaneously shatting all over them (with Stormy Daniels suspended from above, pissing all over you..duh)  and get away without consequence, unless you are Putin on a display of epic treason.

About time Bobbie Brass Balls #Mueller puts the kibosh on all this IMHO.

How long before the FBI or the CIA cancel the unabashedly unpopular and horrifyingly vulgar new TV reality series, “Orange is the New Moscow”?

It’d be nice to think that maybe Congress and the Senate could get together for about a five minute confab and clear this overly bronzed Bozo out of the Green Room once and for all but even the good weed out here in the high mountain meadows hasn’t yet managed to make me that optimistic.  (I’ll keep working on it though.  You can be dam sure of that.)

Congress can’t act because as we’ve all witnessed with our own two eyes, every high ranking Republican with the will and a woody must have taken a free trip to Russia for some of that sweet Saint Petersburg poontang.  Putin’s got them all trapped in some sort of piss parade.

The Russians could drop the X-rated hit “Raining Republicans” onto Netflix, charge five bucks a view, and rebuild the entire Russian Empire on the returns from that alone.

Imagine Vlad, shouting out “They will pay for all our walls!” to an enchanted Russian cocktail audience of oligarchs, as Papadopoulos, Manafort and Carter Page tip wine glasses to each other in the midst of that sordid soiree.

Meanwhile, Trump is dancing around Twitter as nervous as a long tailed cat in a room full of rocking chairs.

Benghazi we loved you!, but Witch Hunt and Fake News are trying to stuff Hillary’s hacked Russian emails into the nutsack of a 300 pound fat man living in his mom’s basement.

The fifteen Russian hackers already living there are seriously short on space because of all the file cabinets stuffed with Trump’s confidentiality agreements hidden behind the left nut.  There’s political gold in the situational comedy opportunities presented right there that have been squandered because of the ineptitude of Trump’s disorganization.

The whole idea of having critics (and potential witnesses) of the series strangled and poisoned by nerve gas has not provided the intended ratings boost to stop the Orange slide.

Sleep well America and hope that Uncle Bobbie can wrestle the button away from the Mandarin Colored Muscovite before he blows us all to Hell and back.

Who else is compromised inside the Republican circles?  Is their reluctance to take action against Trump fueled by more than partisan fervor?  It would be adolescent to believe that Russian hacking and compromising would be limited to Trump.  It’s not beyond the pale to imagine that this Russian push to compromise US officials is limited to just the Republican party either.  Did I miss this conversation on ‘traditional media’?

Trump is so bad at telling lies he’s now the laughing stock of world.  Does he even realize it?

On Blowing Kisses to Putin

The Russians are reported to have the sex tapes on him.  That’s a given IMHO, and something that I’ve postulated about long before the recent release of information on the breadth and depths of his sexual peccadilloes.  Trump is almost certainly fully compromised and will continue to be compliant with whatever the Russians want.  I’m pretty sure some of the NSA, CIA types he’s been pissing all over will have the last laugh.