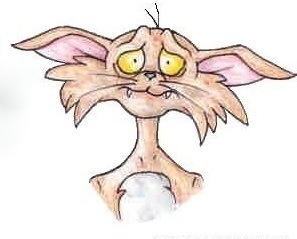 As the most prominent atheist comedian on the planet,I give thanks to the many godless blessings that PZ Myers and his not-so-merry band of Girlyban Skepdinks have provided me. A virtual cornucopia of idiocracy to choose from. The only other comedic assignment with more low hanging fruit than I’ve been provided would have been writing jokes for Bill Mahr during the Bush administration. I could have never have imagined (We all knew!) it would still be going strong at this late stage of the game.

But I don’t make the news, I just report it. PZenu and the pusillanimous pixies of Feminology are holed up over at Pharyngula, which to those unfamiliar with Feminology, is the Internet equivalent of the safe haven carved out by Scientologists in Clearwater FL. Like their cohorts in nonsense, the Feminologists were quick to invent their own rules and jargon. Being blocked and banned as a suppressive person was their initial mimicry. Here we are a couple years on, and now they’ve got an automated process for blocking content off their computers that’s even slicker than the blocking software the Scientologists make their people use to protect them from vicious (truthful) Internet content!)

I swear on the imaginary soul of my long departed mother that I am only adding the tiniest bit of hyperbole as I recount these cult-like similarities, and we haven’t even touched on the Feminologist-specific jargon issue yet! Suffice to,say that those idiots over at Pharyngula HQ are so Out Tech on proper skepticism that rehabilitation seems out of the question. The girls over at the PeezOrg have spent way too much time hooked up to their she-meters. There is always a little hope for their recovery but that’s assuming you could wrestle them away from their firm grasp of PZenu’s balls in the first place (Please no photoshops! (I see it already!)) I run a clean ship over here.

This will probably break the heart and soul of those like Michael Nugent (pity the poor dumb bastard) who favor a policy of NOM (non overlapping menseshysteria) between skepticism and the outright bat shit insanity that appears in faithless femininity, but I see no place for allowing evidence free claims to invade and dilute organizational attention away from the mission of figuratively (trigger warning) bitch slapping creationists and Jeebus slobberers who employ the same techniques (tactics).

One final little dingle dongle to make note of. A sad reminder that the virulent nature of memes (both good and bad-thank you Richard Dawkins) goes on unabated, and can laterally transfer from one group of pusillanimous pixies to another. In the latest example it caused a death (of Adria Richard’s career) and she wasn’t even a part of the skeptic movement! It’s not “something in the water” at conferences or a germ picked up off an unsanitary toilet seat at the buffet restaurant loo (unless that’s where Adria happened to be sitting when she got infected reading the Rebecca Watson Slate article e.g.). There is protection available for those who need it. Simply following this blog or my Twitter feed is a good first step.

Hat Tip to the many positive women of skepticism. Their inspiration and support instills a tingling sense of wonder in the nether regions near my dangling tender jiggly bits. I would name them but I’d sound like Brigham Young reading off a list of his many wives and besides, I’d never kiss and tell.

As you read the following post, do not be fooled into thinking that I do not truly love Holli.  If I wasn’t old and married I would be like totally trying to do her.   “Tech Girlz Give Broader Bandwidth” has always been my motto. She knows male sexual peccadilloes better than a Black Ole Miss law student knows the escape routes from the Oxford campus. Also, this.
–

When Holli invokes the colorful images of her ‘big ole butt‘ near the very beginning of her FB post, it is no accident. It is a move designed specifically to get the southern boys all distracted from the nonsense of religion long enough that Miss Holli can scoop them into the waiting arms of imaginary Jeebus.

–
Holli is just so crafty and forward thinking with her feminine charms, I often find myself wondering, “How many a poor southern boy has been Shanghaied to imaginary Jeebus heaven while engrossed in drooling mental images of the aforementioned ba-dunka-dunk?”  I’d safely guesstimate at least a handful.  Maybe some percent of them think they see the face of imaginary Jeebus in the buttcrack of Holli’s ba-dunka-dunk?
–
(I would put MONEY on it…see below)
–
Wait a minute I can hear you all screaming!!  What kind of warped shit are you talking about Tim?  Is THIS what drugs does to you?  But hold on there my fair weather friends.  There really IS a Christian precedent for seeing imaginary Jeebus in buttcracks, so my invoking it in the hazing of Holli is entirely within the bounds of respectable human decency, (assuming that which goes on in the minds of Catholics seeing imaginary Jeebus in the Buttcrack of a seat cushion can be considered “respectable”).  But,…I digress.
–
Fortunately, Holli and I have a long and rather intimate (intimate makes it sound dirty which is why I used it) work relationship over a range of many years so I feel safe she will not rush to commit suicide over me giving her public post a closer examination and broader audience.
–

Buckle Up For Your Own Safety

Holli posted a rather spirited post to her public profile on Facebook that caught my attention, most likely because she “targeted my FB using her #madtechskillz and still harbors a secret crush on me (I am old, but dam if I am not still outstandingly “fabulous*)***.  Now that she has my attention, and I perhaps yours, please follow the bouncing ba-dunka-dunk down Facebook history lane with me for a very short trip back in time.

***May just be the strong essence of testosterone momentarily making me love myself more than usual, but if it helps an old man feel a tickle in his nether regions, can you honestly begrudge him (ok dammit, ME) the small measure of pleasure still available to a man so far along the Matrix timeline that his dangling jiggly bits are racing towards the canyon floor with a speed and intensity not seen in America since Evil Knievel was spotted plummeting to the bottom of Snake River Canyon in April, 1972?

–
If God is mad at me and extremely supportive of Holli, she is young and delicious enough just to send an evil prayer my way by winking suggestively at the creator and I’ll have a shorter life expectency than a ten dollar Walmart lawn chair at a Rankin County family reunion barbecue.  It’s a chance I’m willing to take.
–

Holli wants you to know she has your Happy Holidays tied up in a knot, secure in a canvas bag (left over from when they used to sell bulk Mississippi pecans) and ready to drown in the big muddy, but I am paraphrasing a bit so see below for her impassioned first person account.  The Italian Male Catholic translation of Holli’s Feminine Baptist Message, condensed in the most simple form?  “I got yer’ Happy Holidays right down here in my pants buddy.  Why don’t you come over here and tickle my bells?”

And now, for the inimitable Ms. Holli Hayes (copied and pasted from FB):

So now were upon the holidays. I have just heard happy holidays, happy holidays my big ole butt. It’s merry Christmas and if you don’t like it then pack your bags and find somewhere else to spread your pathetic rhetoric, Christ is every where in everything. Alway has always will…no matter how you political pansies try to push you liberal crap on everyone. So give all of us a break and kick Santa to the curb and give Jesus his glory so maybe we can all have harmony. Peace out.

Part Two – My Solitary Comment in reply to Holli