Scores of rich westerners are going to have to delay their plans to climb Mount Everest until all the bodies of the dead poor people who actually live there can be removed.  Life can be so unfair.

The nation looks for a way to reduce over-policing and reduce the levels of angst in minority neighborhoods.  The utility of legalizing and taxing weed is not to be mentioned in context with these events.

When we’re not decrying the amount of black violence in our cities we’re busy extolling the virtues of minority males beating the crap out of each other for huge piles of money in the ring or on the field.

The cops in  Baltimore are bringing civility back to law enforcement by  killing Black people   already in custody  on their way to the police station.

Just when you think the Republicans can’t get any more ignorant than the previous week along comes an  imbecile . claiming Obama is bringing on “the Rapture”.   It boggles the mind. #creationscience 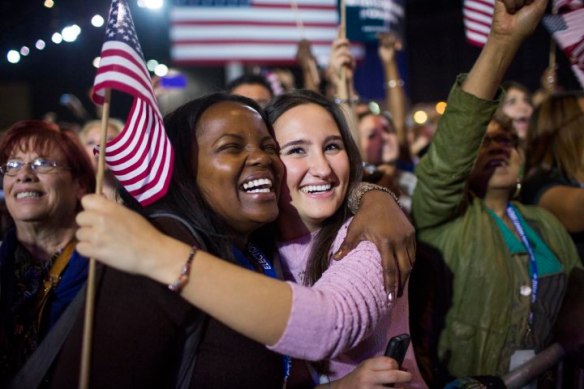 I have a Facebook and Twitter feed to prove I was up REAL late here in Germany, watching the election and putting my bony fingers of contention to good use. In fact, the night of the election my fingertips were bouncing off my keyboard faster and harder than a midget cowboy riding a Dutch hooker.   For the record, I am only willing to shell out for food for the hungry, universal healthcare for the masses and a nickel more for a pizza so the delivery guy can afford $4 gas AND a dentist.  If any of you oversexed Democrats high on legalized hippy lettuce wants to see that rodeo in Amsterdam, you’ll have to pony up for your own ticket.  I promise you’ll get a far more graphic demonstration of the metaphors applied in the aforementioned simile.

I have some Tweets from the evening that are more precious to me than my kids.  I’ll pull more screen shots out later and mix them in with my old vacation photos, either on a future blog post, or over at my house when we’re finished with sanctifying Christmas by stuffing our faces with cranberry sauce, before the start of the sacred NFL Xmas game extravaganza.   Just in case you think my football analogy as sui generis:

It’s times like these that are made to reminisce on things that happened back in the “good old days”.  If you can’t wait to see my full set of tweets, they are out there in the wild, but take caution.  Think of my tweets as “highly concentrated snark”.  Reading a couple of them is equivalent to chugging two large Red Bulls.  Do not read them while driving or operating heavy machinery.

Things weren’t looking good for Romney even before the sun came up on election day.  His commie-loving son had just been caught trading arms for hostages with Putin in Russia, and only days after his Dad was on TV trying to scare everybody in America about the missing Czarist WMD’s in his foreign policy debate with Obama.

The spectacle of visible human suffering on election night 2012 was one I shall never forget.  A shot heard round the world.  The carnage was so total, and the chaos so complete, that at least one news anchor sprang from her perch running wildly about, on a frantic search to find somebody, anybody, who would confirm Karl Rove’s theory of a flat Earth.  This theory, bolstered by more than a quarter billion dollars of the most sophisticated research the Creation Science Institute could muster, added that extra touch of schadenfreude we’ve all come to expect in reality TV shows (or Slasher movies) produced over the last decade, so we at home were all thoroughly prepped for a big twist.

Nobody Could Have Predicted

That is, if we TOTALLY ignore this guy who had been repeated phoning, texting and emailing the Romney/Fox campaign extolling them NOT to volunteer to go down into that dark basement, but the promo trailers had been blasting America for months and it was clear from seeing those, that the Republican party was married to a stale plot device with the same loving ferocity Mitt has expressed towards the dim-bulb blonde he chose as his wife.  What a conundrum!!

Dixie hadn’t experienced a November event anything nearly this tragic since Sherman’s March to the Sea in 1864.  Obama, like Sherman had “destroyed much of the South’s physical and psychological capacity to wage war”. 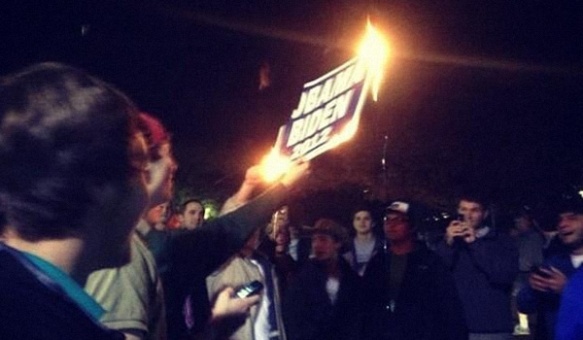 Just like Lincoln in the aftermath of the Great Northern War of Aggression, Obama still has a bit of mopping up in order to ensure a proper southern reconstruction.  This task is particularly difficult considering the unrepentant and thoroughly unreconstructed “Sons of the Confederacy” pictured above in Oxford Mississippi.  This strapping band of Brooks Brothers racists were busy going Johnny Reb, burning Obama campaign material in pseudo effigy, just on the off chance they could re-inspire the spirit of nineteenth century racism.  The only thing missing were the white robes and official seal of the KKK, though to be honest, I think at least half of those folks had some type of cross dangling from a gold chain around their necks.  They try to keep their racism tucked under their tshirts, but sometimes there’s an accidental “nipple slip” that makes it past the seven second delay.

Insane US politics is only one of the many minor perturbations that I have been dealing with lately, though to be fair, the 2012 election seems to have consumed the entirety of the last four years.  The megaphones on Bullshit Mountain began blaring immediately after Obama was overwhelmingly swept into office back in 2008 (in lieu of the old soldier & his organ grinder monkey sideshow act).  Good times?  You Betcha’).

Just to give the Republicans a port in the very stormy seas of their defeat, I finally found an EXCUSE for them to pass around that doesn’t rely on Karl Rove under-counting the Black kids crowding the candy aisle at Walmart.  They can thank me later: