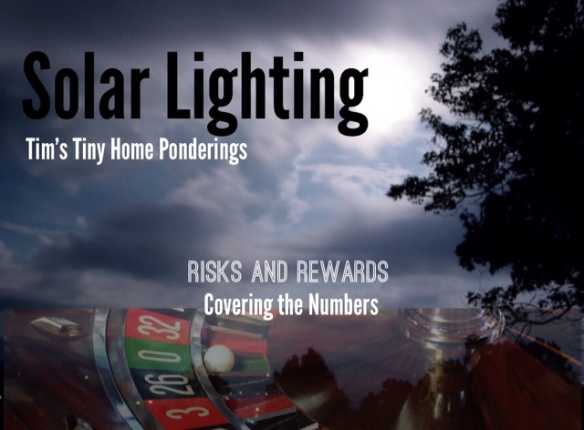 Based on real world experience with a modern high-output 10 watt LED lightbulb, Tim’s Tiny Home’s total energy budget for LED lighting is being set at 100 watts energy draw per hour.   That seems weighted far enough into the “overkill zone” to cover even my most fanciful ambiance illumination ruminations. Running all 100 watts of LED lighting simultaneously for six hours requires 600 watt/hours of daily energy capacity.

In a minimalist configuration, the light from my current 10 watt LED bulb is quite sufficient to adequately light my little corner of Europe.  Running that solitary, yet powerful high-output bulb (or a combination of smaller bulbs totaling ten watts) a full six hours every night would require a mere 60 watt/hours of daily energy generation and collection!  In an all-out survival mode I could switch from a single ten watt bulb to a five watt (or less!) bulb, cutting the total tiny home solar illumination budget to a mere 20 watt hours/day.  For expediency, I’m going to use the 60 watt hour per day minimalist figure and round that up to 100 watt/hours per day.  Adding “excess” capacity covers unavoidable innate system inefficiencies which I suspect might be more pronounced in a system design so close to the margin. 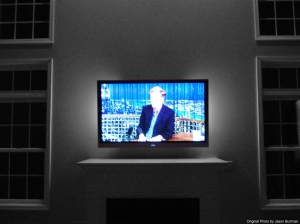 In addition to the dedicated 12V solar lighting system in Tim’s Tiny Home there will also be a parallel solar system of much larger capacity designed to run 110 volt electrical appliances that will be fleshed out in the near future.  One of those appliances will be an LED TV/monitor (or LED DLP projector!!) which will cast a good dose of light into the living room on it’s own accord. 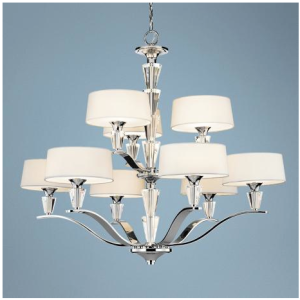 In order to keep my overall tiny home budget somewhat under the construction cost of the Taj Mahal, my target budget for lighting is 1000 dollars.  Setting a thousand dollars as a limit constrains possible system permutations to a manageable amount.

The various parts of any total system must work together in harmony no matter what budget you set for your solar design project.

There’s something internally satisfying about being able to say that my entire home lighting system, top to bottom, costs less than a good chandelier for the entry foyer of an average yuppie McMansion!
END_OF_DOCUMENT_TOKEN_TO_BE_REPLACED