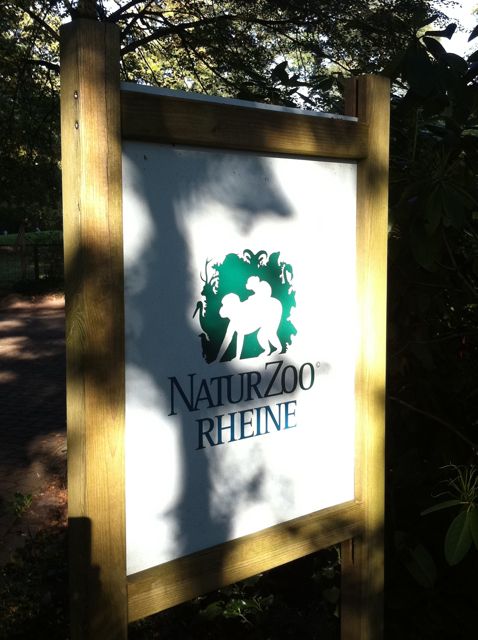 As we distanced ourselves from the dealership, I learned the destination of the bonus trip they had in store for me. A visit to the local zoo in Rheine. Now I’ve been around the world, and I’ve been to the Memphis Zoo, but in all my travels as they’ve unraveled, I still enjoyed the view. At my age, the zoo is always more exciting when you have a child with you. It’s just as fun for me to watch the children react to the animals as it is to see the animals themselves! I have as fond a memory as any father whose ever lofted his young son atop his shoulders for a free ride (and a better view) at the zoo. The afternoon was going to be at least as much, if not more exciting than the trip to the Disneyland of car dealerships earlier in the day!

My hosts were quick to note that their wunderkind was already aware of our destination before they ever shared it with me (or him). He’d been to the zoo enough times to know we were on the road that leads there. He was pointing out the zoo signs well before we were anywhere close to the place. His excitement was as clearly palpable as it was contagious. The combination of excellent weather, the generous hospitality of my host family and the enthusiasm of youth bode well for my afternoon activities.

Upon arriving at the zoo, the first thing I noticed was the availability of several specialty bicycle lockers placed next to the regular bike rack. These are provided for people riding electric bikes (e-bikes) so they can charge their bikes while visiting the zoo. How cool is that?!? 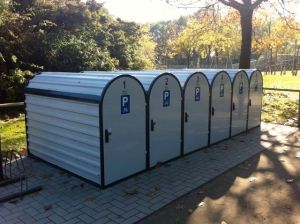 I was barely within the zoo when I noticed several people had their dogs with them.   I’m getting used to bringing my dogs along to all the restaurants (fancy or otherwise) my wife and I frequent, but I never even considered that they would find equal toleration at the zoo! 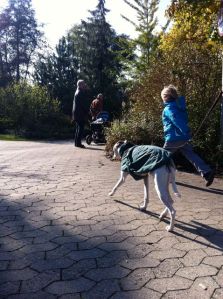 I’ve had many of these. “Toto?, I have a feeling we’re not in Kansas anymore.” moments since my relocation to Europe, but when we strolled into the monkey section of the zoo, I almost went into shock.  The monkeys were all sitting around within a special enclosure (no dogs allowed in there).   They were not caged in any way, and you could walk right up to them (no touching). 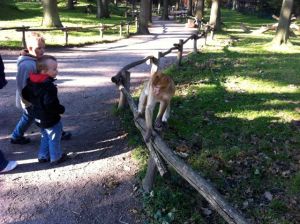 I got so close to this one that he reached out and tried to grab a pack of cigarettes out of my coat pocket….bad monkey!! 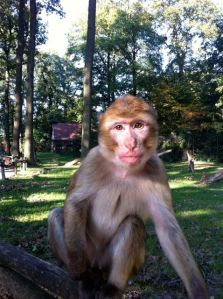 There was a similarly interactive display in the penguin area.  The signs offered a disclaimer about them biting (they will!!), which roughly translated said “You have only yourself to blame”.   The concept of contributory negligence must be unknown here.  In any case, I couldn’t resist my primal impulse to pet one of them. 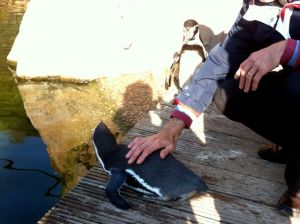 I let several of them bite me on purpose just to see how bad a bite they would inflict.  My hands are tough, but one did manage to nick my finger just enough to draw a bit of blood.  Best to keep a close eye on the kids.  I tend to believe that a monkey going berserk and ripping a kid’s face off is a much bigger risk than a penguin bite, and that’s obviously a risk that this society is willing to take.  If you ever get a chance to walk freely alongside the monkeys, I would encourage you to do so.   As we left the zoo, I couldn’t help but feel as if I were leaving the set of a National Geographic special.  We strolled “Out of Africa” and back into the parking lot for the short ride home, completing Teil Zwei of my perfect German Saturday. Here are parts three and four:  Teil Drei – Das Große Spiel