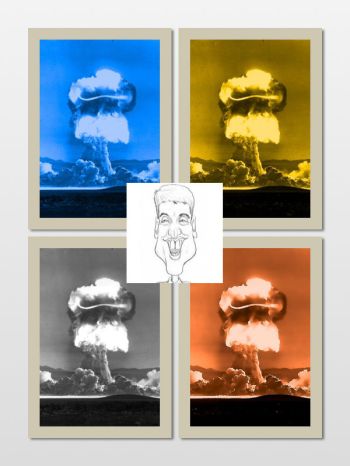 This renewed focus on the issue of increased thyroid cancer begs the question; Is there too much thyroid cancer being diagnosed, or is this just concern trolling masking the ongoing scientific coverup of a(nother) horrific chapter in US history we’re suppose to ‘forget’?

It’s also a ‘mystery’ as to why so many ‘sudden’ cases of hyperactivity disorder (ADHD) started popping up like dandelions in springtime beginning with the youth of my generation.  So many mysteries!

Per capita thyroid doses for the population of each county in the United States from Operation Plumbbob in 1957. 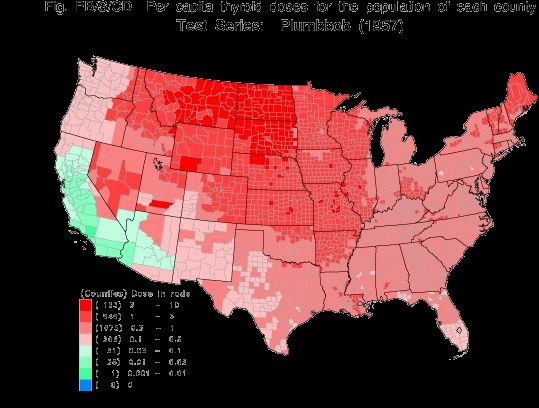 This increase in thyroid cancer COULD be due (makes perfect sense) to the long exposure lag-time for radiation-induced cancers.  Many of my fellow baby boomer buddies were bathed in radioactive fallout in our childhoods, even though it was widely known that exposure to certain nuclear isotopes was particularly nasty to the developing thyroids of kids.  We were spared a nuking from the Russians but we still managed to inflict upon our children, one of our own making.  It’s apparently as ‘forgotten’ to the ravages of history as are the admitted war crimes of the Bush administration.  Looking back will probably turn us into a pillar of salt or something.  I need to check with a creation scientist to be sure, but having lived it, that data sure looks observational and historical to me!

Those above-ground nuclear tests out in Nevada blew concentrated fallout all across the midwest as can be clearly seen in the map above.  There’s your perfectly rational explanation for the “sudden” increase in thyroid troubles as well as my standard answer to “How the Hell did you end up so special?”   We don’t need to call in a creation scientist to figure this one out for us folks.  It’s as fundamental as the melting point of steel (Fahrenheit 911).