It’s no surprise that Mississippi isn’t exactly known as a cultural hotspot, so when an event of the significance of the Afterglow Film Festival in Grenada hits the scene, I would be remiss not to highlight it as one of the more prominent activities worth attending.  In short:

At the Grenada Afterglow Film Festival, you’ll see 7 hours worth of feel-good, short, family friendly, independent films. Our spotlight category is for “Feel-Good” films – We want viewers to be moved to feel the “Afterglow” of the festival and of the small town atmosphere in Grenada.

Check their website for all the other family friendly activities!  Of course there’ll be music and food galore!  There’s no way you’ll want to miss the Sturgis movie after seeing this promo picture!

The event is organized and run by a couple of independent young women who have gained broad support in the community.  Here is a promotional picture taken at a local television station.

I’m hoping I can score one of these awesome glow in the dark festival t-shirts!

My honey do list for today included runs to the grocery store, the waste management (recycling) center, and the vacuuming of massive amounts of dog hair out of the Mercedes. It’s not that we let it collect for any long period of time, it’s just that we’re constantly taking Bandit and Lizzy with us everywhere we go.  They both shed fine, white hair faster than a platoon of boot camp barbers. It wafts off them like cumulus clouds, and as the rays of sunlight intersect with the aerosolized pet dander I imagine the car looks like a rolling snow globe populated with two spoiled dogs nuzzling up to the glass.  But I digress.

Three Bags of Garbage and some Glass Bottles

I had intended to take some pictures at the recycling center today just to document the degree of sorting and sophistication that is involved in going to “the dump” in Germany. I didn’t get any pics because some gruff looking foreigner walked up to me and started chatting away in German like I was one of the local boys.  He’s spewing German out like a well oiled German machine gun.  I’m busy comparing the words I’m hearing him say against the list of 53 German words I’ve familiarized myself with (in the several years I’ve been here).  I’m wondering  what the hell the guy is talking about while simultaneously nervous I might have inadvertently violated some arcane German trash sorting rule or possibly breeched some other local custom.

He didn’t look like he worked at the recycling center, but it’s not like they’d dress up for work so I couldn’t be sure. I had already paid my five euro drop off fee so I knew that covered.  Was my car parked at the wrong angle in the drop zone?  The last thing I wanted was an international incident.  I told the fellow, in my own perfect dialect of midwestern and Mississippi slanglished German, that I don’t know any German.  He keeps on talking. How stupid can he be?

My ability to read these types of situations and pick out the meaning of the conversation is approximately equal to that of Siri 1.0.  The first word I noticed was verkauf, which is to sell, but bauern was also in the mix and that means farmer.  I’m working my mind thru “selling” and “farmer’ as I stand at the back of the Mercedes digging through the trunk for errant refuse.  I try, again in vain, to verbally expound on my ignorance of German.

I’m sensitive to the fact that this guy probably doesn’t even understand that I don’t understand.  I am simultaneously amazed that he is totally unable to translate my facial expressions that are screaming out in international angst  “I haven’t a clue in creation what it is you’re slobbering on about!??!”.  I may have to go back and take remedial body language at the tantric center over in Holland.

As I stood there mulling over farmer and selling, I heard him ask “Benzine oder Diesel?”  Like any good Clue player can tell you, it takes a very small set of data points to conclude that it was Uncle Mustard with the lead pipe in the study. I was pretty good at Clue.

It finally hit me as I watched this guys eyes sparkle as he hungrily scouted my Mercedes that he was interested in buying it from me.  This guy thought I was an old farmer that might possibly want to sell him my immaculately cared for, but aging Mercedes Sedan D’Elegance.  I don’t hold it against the guy, because on any given day, what with my advanced aging and decrepitude, I probably look like I could keel over any minute. He must have felt like it might be his best/only chance of scoring such a cherry ride.  I gently rebuffed his confused offer and exited stage left.  Another potentially ugly international disaster averted.

The Rest of Saturday in Paradise 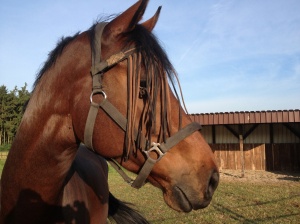 Later today, I’ll be hanging at the international equestrian extravaganza going on down at the stables. It’s the bee’s knees, specially if the b’s you’re interested in are  Bier, Brot und Brötchen. I’d expect at least one Instagram picture of a German barmaid filling my glass will emanate from that meta data location in the immediate future.  FWIW, I’m traveling the rest of the day via Iron Donkey, my Tomos moped.