The wobbly thinking women of Atheismplus have truly found their niche.

All the Skepchicks in their master’s chamber (at 4a.m.), still can’t kill the beast:

So she called to the Captain, “Please bring me some whine.”

He said, “We haven’t had that spirit here until you lost your minds”

And still those voices are carrying him far away.
Wakes him up in the middle of the night,
Just so they can bray:

Hi friends! Excuse me, but I need a moment to turn down my MPscree player so you can hear me speak a bit more clearly. OK, let’s roll.

I watched in awe and disgust at the first act in the #Atheismplus comic tragedy, the one that began over a simple cup of coffee in a faraway land not that long ago.  The stagecraft lacked direction and the subject matter was so obtuse that many in the audience could not engage in the “suspension of disbelief” necessary to enjoy such poppycock. Shorty thereafter, when a prominent foreign critic had the temerity to weigh in on the wastrel’s imagined woes, things really started to get interesting. 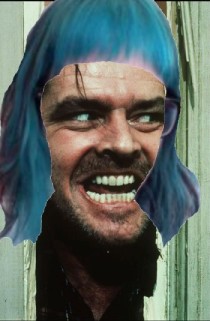 The stage for act two is now set with the lead actress secured for the sequel. The setting remains the same. Picture a lonely Irish hotel on some godforsaken sea-battered crag of land. A Dublin hotel that, not coincidentally, contains a well stocked bar within stumbling distance of the guest-room elevators. Curtain rises soon. Veteran stage critic Justin Vacula (@JustinVacula) has been tasked with the dreary assignment of witness and documentarian to the vodka-fueled banalities that the blue-haired bobble-headed bimbo is expected to bring to the fore.

In the meantime, we’ll all just have to amuse ourselves with the shit-slinging monkey that Ophelia Benson has become. Not that she is ANY different, or even marginally better at the task than her blue haired (or bearded) contemporaries. One trained seal bounces a ball off it’s nose while the other one claps wildly.  Seen that movie too.

One thing is for sure. I missed a huge opportunity to make a name for myself in blogging by not focusing on the single topic most important to their audience, continual whine (not that I’d want them as followers, but just for the sake of argument). If only I’d had the foresight to focus more on the people who troll me and post negative things about me I could be infamous too! Believe it or not, cuddly as I am, there are a LOT of trolls and Timhaters out there to pick from.

It would have required some sacrifice and commitment to be sure. I would have had to spend countless hours winding through the catacombs, Googling myself for haters and then cutting and pasting all those together into semi-coherent web-posts. I’d have had to shift my focus off stuff that REALLY matters but that seems a small price when the payoff would have been much more Me, Me, Me.

On the subject of ME, I am an expert.

I could go on all day long just telling you about me, my wife’s terminal cancer, my son’s upcoming open heart surgery or the troubles my old dog Lizzy has shitting out all the cookies Granda feeds her, but as it so happens, me and @Mykeru have some mirrors that need attaching to my ceiling, so the other stuff will have to wait.