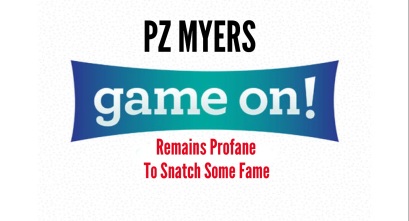 Being a prominent critic of PZ Myer’s isn’t all roses and daffodils.  There’s the associated turmoil of being slandered, mocked and marginalized by the corpulent trained seals in PZ’s traveling circus show.

I’m running with the circus seal analogy today because that’s what naturally springs to my mind when I imagine all the misshapen #atheismplus girls in sundresses feeding PZ Myers grapes and wiping the resultant spittle off his beard.

Some folks wonder why I brave the hoary mobs of PZ’s minion.  To quote the acclaimed ex-FTB author Al Stefanelli,

For one, I am fucking retired. Retired, meaning I don’t blog for money, don’t write for money and I don’t go on speaking gigs. Additionally, I know I am none of these things they call me and the people in my life that matter to me also know it. Their rants, accusations and attacks against me, as well as their willful ignorance and persistent desire to take my sporadic and occasional writing completely out of context have no bearing on my personal happiness. It’s Game On.

I just took the time to check in over at PZ’s website, aka the No-Tell Motel in Morris, and the post with the anonymous serial rape charges against Michael Shermer is still up.  PZ has frozen the comments at just over 4000 while simultaneously mentioning the anticipated (subsequently delivered and now fully broached) Shermer legal action.

Now we sit back and wait.  Maybe @mykeru will start a reverse countdown clock for us to watch while we wait for an army of Brooks Brothers lawyers to swarm Morris?  He’s been pretty reliable and manages to post way more content than most of the people on the BlockBot list who have to simultaneously manage to write and send all those threatening emails to Rebecca Watson (in order to maintain his special gravitas).

I never did find that microwave popcorn I went hunting for the other day here in Germany.  The stuff that I did manage to locate was a variation that included a sweetener for a sugar flavored popcorn experience.  I just want salt and maybe some well imagined artificial butter flavoring.  Worst part is that I could have picked it up over in Holland the other day if I hadn’t forgotten after leaving my favorite “coffee shop”.  I told you at the start, it isn’t all roses and daffodils.

Edited to add (I am not making this up): WordPress auto-suggested the tags “circus seal” and “Rebecca Watson”.  So much win. 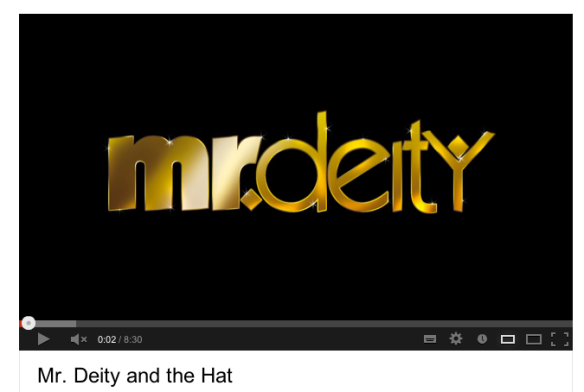 As if the abundance of blessings I receive wasn’t already enough for any single human on the planet, and in spite of my continued outpouring of flirty heresies, providence has again reached out and given me a divine tickle.

It’s heartwarming enough to realize how much my success does to destabilize the delicate sensibilities of the creeply (rhymes with deeply) religious, but when Mr. Deity steps up to the plate and covers two topics which have been front row/center here on my blog the last couple weeks?  That sets me to pondering my odds on the Powerball lottery!!

The 32.4% of me that’s gay is pretty sure I’d be a lock to win that sucker if I made the pre-announcement that I’d tithe ten percent of my winnings to the Folsum Street Fair committee, because that’s how God rolls.  He loves testing his sheep. (see Job).  But I digress.

Mr. Deity takes a swipe at the racist Mormons and their incoherent (and patently bogus) early history.  If you pay real close attention you get a clue as to where the polygamy fits in.  My take on the current big Mormon scandal involving apostate Swedes is here in Mormon Blues and Mormon Blues 2.

Starting at around the 5:15 mark on Mr. Deity’s video, is the not-so-heavily disguised (major league brutal!) assault on PZ Myers and his totally incredulous serial rape charges against Michael Shermer.  Without ever mentioning the names of the participants involved or the fantastical rape charges themselves, Mr. Deity does more damage to the credibility of PZ Myers and his lunatic #atheismplus American Girlyban pom pom girls than even the esteemed Thunderf00t has managed to do in his smartly crafted four part series on Why Feminism is Poisoning Atheism.

The Moral of the Story

At the time of this post, I have no knowledge as to whether PZ has “ceased and desisted” in the manner prescribed by Mr. Shermer’s legal counsel.  That’ll be something I check on immediately after hitting “post”.  Last time I checked, the offending blog entry and related 46,442 comments (estimate) were still up.  The anticipation of the atheist and skeptic blog and twitter community over this subject yesterday, was on par with that of Brits over the birth of the royal baby or that of the Catholics obsessed over the recent replacement of the Pope.  FWIW, I think the only puff of smoke we’re likely to see rising in Morris Minnesota anytime soon will be from PZ’s eventual self immolation.

I’d be perfectly happy if PZ would just comply with Mr. Shermer’s extremely reasonable request to remove and apologize for his miscreant behavior and return to being the likably weird atheist uncle (the one who didn’t try to fiddle you under the table at Christmas dinner).

Many others are not as reasonable as myself.  Suggested alternatives to “balance the scales of justice” include the removal of Mr. Myer’s head, which would then be placed either on a pike outside the Morris Minnesota campus as a warning to future demagogues, or alternatively, as a hood ornament on the Rolls Royce Mr. Shermer is going to buy with the monetary damages

In the frenzied perimeter surrounding ground zero in Morris Minnesota (Outside the Dome), speculation on the PZ Myers-Michael Shermer bout, (The Fumble in The Jungle) is all the “news” there is right now,   Over at PZ’s site, he’s gone incommunicado.  He’s busy peddling his new book, The Happy Atheist, and is also distracted by having to pick all the chunks of “cease and desist” out of his beard that #flirty (drunken) rapist Michael Shermer spewed all over it.

All we can know for sure is that today is the “drop dead” day cited by Mr. Shermer’s legal counsel to retract the original post and delete the accompanying 26,378 (guesstimate) negative libelous comments accumulated to date .  On top of all that, there’s the expected formal apology requirement that I noted in yesterdays post.

Of all the anticipated cooperative dispensations demanded, my favorite is the one that requires PZ Myers is to immediately start swinging off Mr. Shermer’s balls like a trapeze monkey at a sideshow carnival.  In other words, something that PZ is already fully qualified to accomplish.

In the meantime, (@mykeru) living in his mom’s cramped attic has gone though all the trouble of constructing a PZ Countdown Clock that is ticking off the remaining time before PZ Myers is in full violation of the cease and desist order.  It’s showing around twelve hours remaining at the time of this post.  In the interest of stretching my Shameful Non Self Promotion out a bit longer than it took Rebecca Watson to deflate a horny apparition in an Irish elevator AND as an electronic reach-around to all the other guys trapped in their mom’s t attic, here is the link to the countdown clock.

Links to all my previous American Girlyban goodness (click pix to open) for you to read while keeping one eye firmly glued to the countdown clock:

Gasbaggers of the American Girlyban

Attack of the American Girlyban 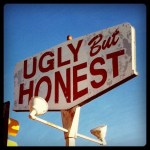 As always, those without mice support will miss roll-over popup hovers, the atheist “easter eggs” I like to include on hyperlinks and pix.

Edited to credit @Mykeru for wankery above and beyond the call of duty. 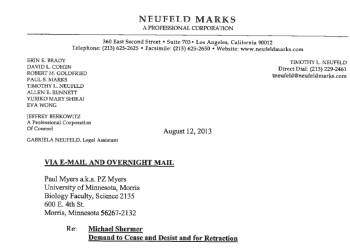 I’ve been following the car wreck of PZ Myers “career” choices with shock and amazement.  My interest has definitely been renewed since his slanderous post attacking Michael Shermer the other day.  Of special concern to me is how Mr. Shermer would react to the hairy fatman slinging monkey feces all over the inter webs.  We’ve all been wondering for quite some time who would rid us of this meddlesome pzPriest.  In case any of you hadn’t yet heard, Mikey did it!!

Late last night (here in Europe) I noticed that PZ had a post about receiving a cease and desist letter from Shermer’s lawyer.  Rather than read it last night, I decided to set it aside as a breakfast treat.  Imagine my surprise and dissapointent when I woke up this morning, eager to dive into the gory details, only to find that PZ had pulled the complaint he received from Shermer’s lawyer out of his post!!

Just like the Mormon apologists I blogged about not long ago, PZ must have figured the letter from Shermer’s lawyer contained too much factual information negative to his personal jihad against Michael Shermer, and just like the case of the attempted Mormon coverup, probably didn’t count on the fact somebody would grab the document and mirror it elsewhere.  To make a long story short, I made quick work of locating the “scrubbed” doc and as such we all get to bask in the savory glow of PZ’s schadenfreude.

To be fair to PZ, the letter from Shermer’s lawyer, replete with facts, doesn’t really “fit” into the phantasm of the narrative that PZ has constructed around his frenzied imaginations of atheist get-togethers as nothing more than a perpetual Skeptic’s Sodom and Gomorrah Carnival Show.  Here’s just a taste of the karmic goodness that awaits those who download and read the entire six page PDF:

Contains numerous false and defamatory statements about Mr. Shermer based on certain unsubstantiated allegations purportedly made by an unidentified woman against Mr. Shermer. These statements are completely false, inaccurate and intentionally misleading in that they are intended to suggest that Mr. Shermer had forced this unidentified woman into sexual intercourse without her consent, and that he somehow “raped” her or is a sexual predator who would coerce women into nonconsensual sexual intercourse. Your statements in the Entry, including original statements, update and comments, to the entry to be false, inaccurate, intentionally misleading libelous, and these statements were designed to seriously damage Mr. Shermer’s name,reputation and character in the science community and elsewhere, and to humiliate Mr. Shermer.

The document also makes very specific demands of PZ. In addition to removing the offending content (and 4000 associated comments to date) there’s this chunk of cactus for PZ to choke down; Shermer’s lawyer is quite specific as to what is expected of PZ.  He is ordered to post the following statement on his website:

“I retract the original posted on August 8, 2013, entitled “What do you do when someone pulls the pin and hands you a grenade?” (the Entry). Specifically, I hereby retract all statements, quotations, and comments therein made with respect to Mr. Shermer. I extend my apologies to Mr. Sherman  any to any other party affected by the statements, quotations, and comments contained in the Entry.”

Now I’m off to tend to my horses and get some microwave popcorn (not really that easy to find here in Germany btw).  I’m gonna need it for the show that I expect will begin shortly after America wakes up and realizes that The Rumble in the Mumble is now fully underway.

Quick note to those reading this post on an iOS device or other mouse limited device.  You’re missing all the goodness of the Hoverjoy rollovers I place on most photos and links.