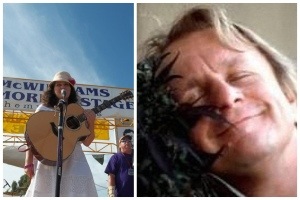 I have been asked to reflect on my experiences dealing with a young lady named Julia Rose, who first caught my attention on Facebook a couple years ago. She has a Facebook tribute page dedicated to preserving and distributing the works, and highlighting the memories, of Peter McWilliams.

Here is Julia speaking about Peter in a public YouTube video taken at one of the many rallies, conventions or speaking (and singing!) venues she attends.

The many uplifting stories of Peter, as well as his accompanying trials and tribulations, are too broad to relate here. I know I would feel blessed to have my own wikipedia page, let alone a youthful cheerleader like Julia, so long after my ashes are scattered. FWIW, I have chosen to honor my personal memories of Peter by ending all my correspondences with Enjoy. But I digress. Let us move on to my personal account of this energetic young lady.

Getting to Know Her

The first time I spoke with Juila was when she contacted me thru Facebook after seeing my New Year’s tribute to Peter here in this blog. She indicated that she was in contact with Peter’s mother who had inherited a great deal of Peter’s literary memorabilia, some of which she was letting Julia share on the web.

We chatted on Skype a couple times times after that. We communed over the ghost of Peter, his legacy and his works. She probed my calcifying neurons for first person recollections and stories from my calls and correspondence with Peter, the majority of which (sadly) came during the hectic months of his arrest and deprivations under the thumb of America’s fascist drug warriors.

Julia shared with me that Peter’s mom was reluctant to publicize the more risqué or controversial aspects of Peter’s political life. Julia’s main interest in honoring Peter was his poetry and self-help writings.

All that touchy-feely emotional hoodoo is just fine by me (and the 32.4% of me that is gay), but the rest of me negotiated stridently with Julia for a much more prominent emphasis on the politics of the subject that cost Peter his life. She agreed and promised to discuss the issue with Peter’s mom.

She seemed a rather shy and reluctant spokesperson at first, but as the last couple years have shown, her message and music have bounced to one event or the other all over the planet (or at least a tri-country area).

She’s some kind of a hippie-chick rock goddess guru within the medical marijuana community these days now that she’s embraced my early mentoring. I’m too old to even keep up with her frenetic pace on Facebook, but I proudly point her out as a protege and someone I knew before they got famous. 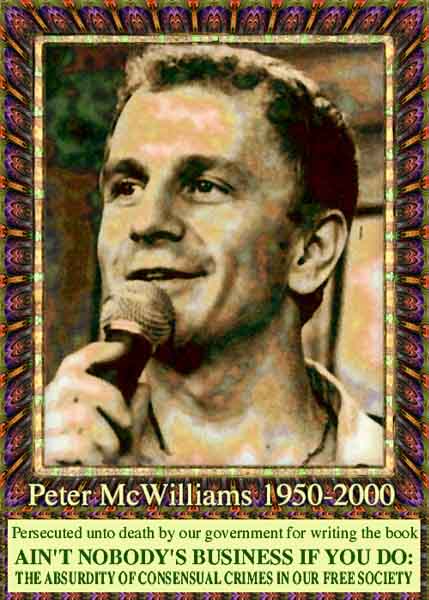 It was reading Peter’s book, Ain’t Nobody’s Business If You Do: The Absurdity of Consensual Crimes in a Free Society, that spurred my interest in him.  I had many pleasant email exchanges with Peter before he was dogged-to-death by reactionary US drug policies.  When my kids ask me, “What did you do in the war daddy?” my support of Peter is always a source of pride for me.  By the looks of things these days, we’re winning Peter’s war (Yo Colorado, Whazzup’ California!!), but there are still many battles to go.

Peter McWilliams ultimately died of AIDS, choking on his own vomit because the US government denied his use of marijuana to treat the nausea induced by the plethora of legal medications necessary to treat his health.

Richard Cowan and many critics of the U. S. drug policies have described his death as murder by the U. S. government, insofar as they denied him the use of the medical marijuana which might have prevented his death. At least one account suggests that he choked on his own vomit because of the nausea.

Shortly after his death:

At the National Libertarian Party convention — where presidential candidate Harry Browne came out firmly for decriminalization of marijuana — Peter McWilliams became the posthumous winner of their Champion of Liberty Award. Peter will be missed. He was the victim of a political assassination, but his inspiring legacy continues to live on.

Here is Peter speaking at the Libertarian Party convention in 1998: