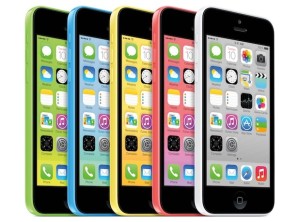 The iPhone 5s and 5c have arrived.

Meanwhile, my iPhone 4 is still going strong, and if I’m lucky, by the time it blanks out, Apple might be shipping the iPhone 7. In the meantime, I’m excited at the prospect of moving to iOS7 in the next couple weeks whenever Apple drops the final consumer release to the public.

There have been numerous tech improvements since the iPhone 4.  Processor and camera-related upgrades are de rigueur.  Now we have colors, though to be honest, it’s a brave soul who doesn’t already armor their iDevices in some sort of protective colored condom.

It’s market genius for Apple to promote customers NOT using a case in order to show off their fancy new colored gadgets.  Lots of broken phones to be replaced means more profit. You pay your money and you take your chances.

Aside from the fingerprint reader, the beltway press seems dinterested in the latest chip improvements or hardware advances in Apple’s new offerings, and much more interested that they didn’t drop the price of the colorful plastic model (5c) enough to make a dent in the Android-awash smartphone markets in central Bangladesh.  That’s something I never would have wondered about, let alone contemplated happening, but then I live on planet Earth and don’t get paid big bucks to write deep insipid analysis like Farhad Manjoo.

To be fair, tech improvements beyond the iPhone 4 are far less critical to me than the operating system that runs on it (and the app environment it supports). For most of the world, anything beyond the iPhone 4 is more than adequate technology. That level of tech has now dropped to a zero price point (on contract).  If you want the added bling of color or the latest in Apple smartphone tech it’s available for a couple hundred bucks more.

I’m hard pressed to come up with a defensible reason why upgrading to the latest model iPhone, just to get the bells and whistles of fingerprint scanners, faster chips and camera magic is worth it.  The camera upgrade intrigues me, but I’m savvy enough to know from experience that at the end of the day, it’s still a “phone cam”.