In Search of Bacon

Today’s post recounts my foray into the “Guns n’ Ammo” department at a Walmart in the great plains. It began when I accepted an offer to tag along to Walmart with Victor, a friend and fellow Vietnam-era (gun nut) veteran. On this trip, Vic was not shopping for gun stuff, but was instead shopping for a new “assault knife”. This seemed like a bit of overkill to me since he was already carrying a legally registered concealed firearm, but whatever.

I normally avoid situations where “Walmart and Firearms” are involved, but on that day it didn’t matter. I needed some bacon.

When Vic arrived to pick me up he was talking some “Fox News” Obama crap which I quickly spanked down. Though tarred with a bit of Tea Party taint, I knew Vic has a general disinclination for killing liberal atheists, and seeing how that overlapped with a large number of zombie meth heads wandering around everywhere, this rendered Vic’s concealed carry as an asset. I’m not sure whether it’s Zombies or Meth-heads who are attracted by the scent of bacon, but I’m sure it’s one or the other.  Best to be safe.

I kinda-sorta felt like Jay-Z out on the town with my own personal bodyguard.

You accept whatever risks are necessary when you need bacon. Nuff said.

Upon arriving at Walmart I quickly snatched up my bacon and followed Vic as he went looking for his commando knife. Walmart keeps ‘hunting’ knives and “deer assault rifles” next to each other in locked glass display cases near the auto parts department. Victor did his knife shopping while I wandered around the adjacent armory taking pictures of all the gun stuff. 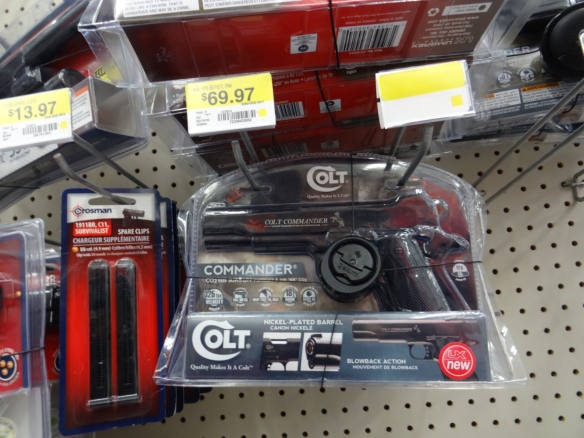 Victor pointed out that certain of the ‘toy’ guns, like the one shown above, did not have to have the requisite orange or red plastic tip identifying them as toys because they were “grandfathered” in under some exemption to the gun laws you can be sure Colt (et.al.) lobbied hard to get through Congress.

Making quick work of my photo-documentation on the (sorry) state of American firearms mania, I approach Vic, still standing at the knife display, drooling. There was a gun-nut Walmart worker attending to some gun-nut shoppers behind the glass counter in front of us (I confirmed their gun-nut credentials by listening to their lingo).

Twisting in the Knife

My sense of culture, having been so recently affronted by an appalling array of militarism in the adjoining aisles, was offended enough I decided to let a little tongue-in-cheek satire drip out. Loud enough for the counter help to hear me I said to Vic:

You know how I hate guns, but I do love knives, because if somebody flexes on me I want to be able to feel the warmth of their blood rushing down my arm when I drive the blade wrist-deep into their neck. In fact I need a new switchblade since mine just broke.

Victor winked at me as I continued my charade by asking the counter help if they had any switchblade knives they could show me. Turns out they’re illegal. Whocouldanode? I feigned a bit of shock, pointing out how unfair it was considering I could buy what looked like an AK-47 in the adjoining display case! Vic knows my sardonic nature and that would have been the end of this story but as we turned to leave the department together things were about to take a turn into The Tim Zone.

Bum Rushed by The Man

Our attempted exit from the weapons department was blocked by a middle-aged gentleman who identified himself as store management. He inquired as to why I was taking pictures. Playing on his marketing weakness, I told him  my purpose was to email them to family so they would know exactly which calibre of ballistics to fill my Christmas stocking. I interjected that I was unaware it was illegal to take pictures of products in Walmart.

Going against my grain I was exceedingly deferential to this intrusion upon my personhood and tried to be as gentle towards him as he was hostile and aggressive towards me. I rebuffed his attempt to examine the contents of my iDevice for the photos in question by explaining that they had been streamed directly “to the cloud” via their free store wifi and were not available on my local device.

Frustrated by this news, he explained to me that there was no problem with me taking photos of products on the shelves of Walmart but that it was forbidden to take photos of things in the glass display cases! WTF? This didn’t seem to make a whole lot of sense to me but I was apologetic even as I questioned him about how a shopper would know this info ahead of time. He said it was posted in the customer service area at the front of the store. I apologized again for my “transgression” and headed straight towards the customer service area to get documentation of this signage, hoping against hope it wasn’t displayed inside a glass display case where a photo would be verboten.  I felt a strong desire to document this sign to round out the story of my experience that day.

I strolled into the customer service department and explained to the staff what had just transpired and asked to see the sign which the manager had referred me to. My approach was a mixture of calm and curious with a touch of shame and confusion thrown in for good measure. I explained that I was a bit miffed and exceedingly embarassed by being accosted during my Christmas holiday shopping.  I mentioned that I wanted to get a picture of the sign to post on my Facebook page to inform my friends of this policy and spare them the disturbing public spectacle I had just been put through by the manager in front of half a dozen other shoppers.

As it turns out there is no sign posted in customer service, which helped to explain why they all looked at me like I was speaking a foreign language when I mentioned wanting to see it. I think it was about this point in the conversation that I pulled out one of my photojournalist business cards and noted that this encounter deserved wider exposure on my social media platforms.  It was at this point in the conversation that the entirety of the customer service staff who had heretofore been very chatty went mute and a call was made to a superior.  A lady identifying herself as the shift manager (Heather) handed me a note with the following information:

That seemed rather curious to me since I was asking for the number to their legal department in lieu of filing a defamation suit for having been publicly humiliated only moments earlier in the gun department.  I’ve several witnesses who, although outspoken gun enthusiasts themselves, are willing to testify on behalf of the veracity of my story as well as the appalling treatment received that day.  I’m still willing to settle out of court for a fraction of what I’m sure my attorney will file for on my behalf.  Walmart needs to understand that Americans have more rights than just those that can inflict severe physical pain and suffering in our neighborhoods.  More photos:

2 thoughts on “Bacon, Ballistics and Bullshit”