Everything Old is New Again!

Your birth certificate and passport are the most important documents there are to account for your citizenship. These are “the papers” you show the jackboots. There is no higher standard of proof.

Thanks to the lunatic fringe (entire Republican party) we all got a front row seat to the power of an American birth certificate in proving ones citizenship!!  It was fun watching the rightwing knuckle draggers squirm when Obama finally confronted their conspiracy prone predilections (Benghazi, anyone?) by releasing his birth certificate!

You’d normally think that the problem of “showing your papers” wouldn’t be an issue that would come up for a couple of middle aged white folks attending an historically Black college in the heart of Dixie.  Normally you’d probably be right.  But nothing is ever normal down south.

I found out the special powers of an American passport while attending Jackson State University with my wife Rita.  JSU is an historically Black college/university (HBCU) where, outside the fact we’re not Black, my wife and I did eventually graduate college.  We both attended JSU long after the buckshot from the state police stopped ricocheting off the woman’s dormitories, but before I could read this Forbes article published just a couple years ago on the overall value of investing in a degree from JSU.   They’ve had their fair share of scandals over the years in both the financial as well as academic arena.

The college took IMMEDIATE action to check on the ‘immigration status” of every student. Even though both Rita and I were among the only white faces on the entire campus, and it would have been considered quite bizarre for even a Nigerian to go through a complete race change operation, we too were ordered to financial aid to prove our US citizenship. At this point in time I had no US passport, so I used my Mississippi driver’s license (or birth certificate) to prove my citizenship without a problem. When it was my wife’s turn to prove her citizenship, Rita whipped out her passport faster than Usain Bolt could sprint a 100 meters. 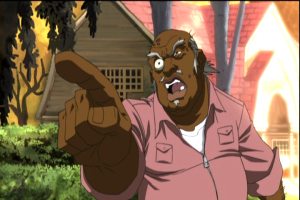 The financial aid officer at Jackson State University looked over Rita’s passport with the same kind of scrutiny one expects when Uncle Ruckus makes bizarre claims regarding his parentage.

After ogling over Rita’s passport for a minute, the JSU financial aid “immigrant enforcement officer” looks at Rita and asks, “What does this prove?”

I have NEVER seen my wife more livid than at that moment!!  She is well aware of the gravitas of having a US passport.

Her “American Dad” got Rita her first passport at the time of her birth back in the 1950’s, most likely to match the silver spoon that went along with it:

As it turned out, Rita knew MORE about what constitutes proof of US citizenship than the folks at THE FINANCIAL AID OFFICE AT JSU, even AFTER they were supposedly on “high alert” from being scammed by the Nigerians!   The fact that the financial aid officer had NO IDEA that an American passport is proof of citizenship is bad enough, but the story takes an even more bizarre turn towards the territory of the Twilight Zone:

The financial aid office REFUSED TO ACCEPT my wife’s passport as proof of citizenship!!!

Beware of a Woman Scorned

My wife, not sure whether she was being “reverse-racismed” or just dealing with the most ignorant and incompetent (college educated) Black people on the planet, immediately phoned Mississippi Senator Thad Cochran’s office!  She shared the indignity she’d been treated to by the campus financial aid office and asked the senator to intercede on the behalf of highly aggrieved US CITIZEN!

Later that day, my wife was called to the office of the JSU college president. He’d just received a callback from Senator Cochran’s chief of staff concerning the issue.  The president of the college was as apologetic as the financial aid office was incompetent.  Rita had no further difficulties with financial aid and we both eventually graduated JSU with honors.