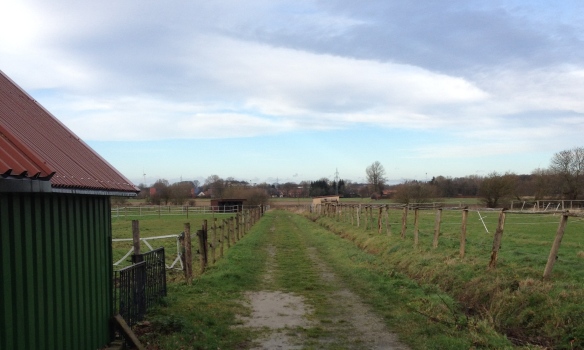 Given the combination of cool yet sunny weather early in the day now, I usually do my stable maintenance sometime before noon. Calling it stable maintenance makes it sound more impressive that just saying I get up early to mow the grass and shovel up animal dung at the barn. Owing to the fact the sun rises here at five a.m. in the summer here, I am usually up very early, and after killing a couple hours of coffee and web surfing, I make use of these cool mornings to mow and whack weeds at the horse stables, before the hell fire heat of the day sets in.

Last Week at the Stables

After wrestling with my Iron Donkey (Tomos moped) for about five minutes, she finally fired up and off I rolled to the the stables.  Upon arrival a few minutes later, my first order of business was assessing the mutant weed/grass growth since the last time I engaged in a good whack session.  Considering the last good whack session I had was only about a week ago, I felt confident that those areas I addressed that day would not need attention again today and I could move to expand my perimeter. There is enough field and fence-line to span three (half) days of mowing and trimming, but I usually can’t drag myself down to the stables three days in a row just to whack myself to exhaustion. I try to space it out but the grass and weeds grow back on areas i had already done before I can
get to the next spot!!  By focusing on the fence lines on the outside perimeter of the field instead of the inner ones, people walking by see a nice tight job along at least the outside edges of the field. That bit of mowing and whacking is, in and of itself, is a several hour project. Surveying the perimeter, I decided to give it a quick re-mow before moving to a new spot.  I should have just moved to the new spot!!

I’d barely begun in my mowing along the weed lined path that runs next to our stable, when WHAM!, I felt a sharp pain right on the ridge of my eyebrow. Intense pain is more accurate. I immediately backed away from the mower, slightly dazed. As I reflexively reached to my eye, I tossed away my protective eyewear as I felt the body of an insect escape from between my head and the top of the frame of the googles (right above my right eyebrow ridge). It was then that I realized I was in the midst of a full-on yellow jacket swarm. They nest in the ground and the mower rolling over their hive set them off BIG TIME.

I have a previous memory (now thirty years old) of doing a similar thing and not noticing until a half dozen wasps had flown up my pant-leg! That was an ugly and painful moment as well. They stung me five or six times back then, but by some miracle, this time I was able to move away quickly enough to save myself from death by swarming wasps!! I did have the one severe sting on my brow, the poison of which nearly had my eye swollen shut. The poison felt as if it had been delivered directly into the bone in my brow ridge.

I managed to retrieve the mower where it was abandoned and left running next to the fence, and get everything put away before climbing back on my Iron Donkey. I managed to sniff and feel my way back home with half my face bloated up like a rapidly swelling fall pumpkin and my vision blurry from the copious release of eye juices from my incessant rubbing of the area.   I took two days to fully recover.

It is a new day and the grass at the stables is growing. The Sun is shining and there’s a cool breeze blowing, but to hell with it, I’m not going.