I’m starting a series on food so I can adequately address the lack of #foodporn pictures on my website.  It’s bad enough I’ve been remiss on #dogblogging, and lord knows I’ve nearly abandoned #catblogging altogether, so these food pix will have to fill in for the lack of an appropriate amount of hairy fur balls.

In any event, food is as cheap as gas is expensive here in Germany and I’ve already documented that atrocity quite well.  I don’t know if I’ll document the actual prices of these meals because I’m bad about keeping my grocery receipts, but none of them are ever going to be more than five euros unless otherwise noted, and I’ll comment on specific item prices as I remember them.  I’ve done a grocery shopping post that shows items and prices for different things here in the stores.  I’ll probably add more to that series as well in the future.  If you are curious about any particular grocery item(s) not shown, toss it in the comments and I’ll do my best to address your curiosity.

Bachelor foods.  The type of stuff I cook for myself.  Foods which are cheap and relatively easy to prepare. 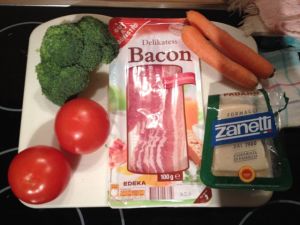 Florets from one half of a large head of broccoli.

I use a large nonstick fry pan for this dish, though I could easily see it being done using a wok.   I fry the bacon in the same pan as the carrots and use the hot grease from the bacon to fry and soften the thinly sliced carrots, which need to be started first as they require more cook time than the broccoli tops or the tomatoes.  See following slideshow for prep pictures.

Total prep time is around twenty minutes, with the frying of the bacon and softening of the carrots taking the largest chunk of that time.  The single most expensive ingredient listed here is the bacon.  I pay 1.29/euro at a local market.  I think I paid two euro for the broccoli, but only used half of it.  So there’s 2.29 euro for the most expensive ingredients in the mix.  The cost of a couple carrots is nil.  There might be a twenty five cents worth of cheese involved.  I’m using some high dollar stuff my wife buys, which I assume is parmesan (package pictured) but you can substitute or omit the shredded cheese and ground pepper to your taste.  I used celery salt on the carrots when I was fry softening them in the bacon grease.  I added a bit of butter to the mix towards the end of the process when I had the lid over the dish, steam-fry softening off the broccoli and tomatoes before plating, garnishing and serving.