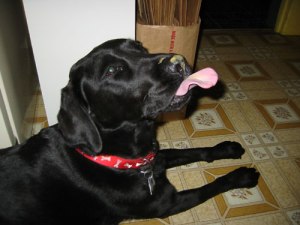 While it’s not all that unusual to read about an errant pit bull chewing off the hands, feet or faces of unwitting strangers, it’s quite rare to read of a family pet gobbling down one of it’s owners gonads:

TRUMANN, Ark. (CBS Atlanta) – A paralyzed Arkansas man awoke to find blood on the muzzle of his dog and a “burning pain” in his mid-section, and according to the police report: “the dog had eaten one of his testicles.”

No offense to the reporter, but I’d have used snout in place of muzzle, since this noun has two distinct (and very different) interpretations.  That minor perturbation aside, I feel powerfully compelled to give a shout-out on behalf of all my hairy, four-legged, butt sniffing friends.

I’ve owned many dogs over my lifetime and nary a one has ever shown the least bit of interest in my balls, despite the fact that my dangling tender bits are now flopping around like wounded rabbits somewhere in the vicinity of my knees.  The article is short on detail and therefore begs me to make the following observation:

Given the Arkansas byline, one must assume that the dog had previous experience with the genitalia in question. I’d suggest the police crime lab do an area swab of this guy’s pubic region for traces of peanut butter DNA.