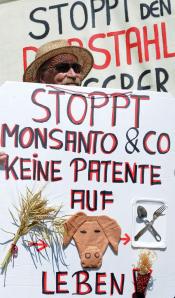 Here in Germany I doubt they’d ever allow genetically modified food. For one thing, Germans are quite happy with the current system of food delivery. They already have some of the cheapest groceries on the planet. On that point, witness that the number one discount retailer in the US couldn’t compete here in Germany (Walmart). They spent a billion euro trying before pulling out of the market in total failure.

Not Just About the Frankenfood

I don’t have any real opinion as to the dangers of eating the GMO stuff, but there appears to be abundant evidence that allowing companies to patent seeds, and then forcing farmers to pay extreme prices for them hasn’t worked out well for a lot of the farmers I’ve read about.  I am also vaguely aware that there have been some disastrous crop failures using this “new improved” technology that can be laid directly at the feet of the GMO industry overhype.

It’s all about the BIO!

Biodiversity is the real answer to food security.  Seems like a no brainer. Look at the example of American corn production. The GMO corn that is now being grown is not even edible to animals without additional processing, let alone fit for human consumption straight out of the fields. It’s already a mono-cultured seed stock known as yellow dent #2.

A lot of people aren’t aware that field corn has already been so heavily modified and debased.   I wonder how much money the biotech companies are going to have to spend to “educate” people on the benefits of buying a ticket on the fast train to the next Irish potato famine? It’s not like you can’t see it coming.