Since my first glance at an iPad it has been a long term goal of mine to switch from content creation on my Mac computer to a portable tablet device.

It is repeatedly stated that the iPad is a poor content creation tool (often in the same sentence that praises the content delivery aspects of the device). This is a claim that has had a fair amount of validity in the past, but it is my viewpoint that the case against the content creation capabilities of Apple’s tablet devices are now being wildly overstated.

There is no debate over the lack of such capabilities in the early iPad and iPhone iterations. The lack of access to a true file structure is an honest and recurring challenge to be sure. About a year ago, I got my hands on an iPhone4. WordPress had just released a free app for content creation and I downloaded it onto my iPhone (and older iTouch) to test the limits of the app. I did at least one or two WordPress posts using nothing more than my iPhone. The biggest challenge for me at the time was the small screen of my iPhone which exacerbates the issues of both my aging eyesight as well as my fat fingers.

Other than the ergonomic challenges of tinkering around on such a tiny device, the WordPress app seemed to work quite well early on and subsequent iterations have no doubt improved and expanded upon that functionality. Aware that I would eventually take the plunge and buy an iPad, I started loading up my iPhone4 with as many content creation and photo apps as I could find. A complete list is too expansive for purposes of this post, but suffice to say that if there is a highly rated content creation app (free or paid) there are better than even odds it is on my iPhone, and by way of Apple magic, now installed on the Mini I am using to compose this post. 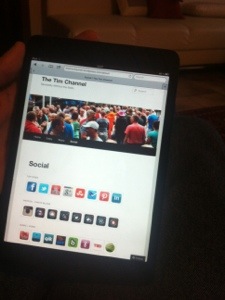 If the iPad Mini had not arrived on the scene when it did, this post would be constructed on a full size iPad instead of the Mini, but given the special blessings that providence seems to continually toss in my direction, the Mini was released just in time for me to get it instead of its larger sibling. My most excellent wife took pity on me and picked one up in the US on a recent visit to the states, using the awesome buying power of the Golden Euro we now use in place of the weaker dollar. Apple sees fit to offer the same dollar/Euro price for the entry-level Mini at € or $ at 329. This translates into being able to buy an entry level US iPad Mini for €250, a hefty savings over buying it here in Europe @€329! At the end of the day, given the high demand and limited availability during the peak holiday season, she was forced to go with the thirty two gig version @ $429. (€ 326)

The Verdict
The jury is still out on the ability to completely abandon my desktop for a tablet, but there is little doubt in my mind that as time passes the challenges of doing so will become even easier than they already are. Expect future glimpses into this process as I spend more time getting acquainted with my new iPad Mini.

1 thought on “Maximizing the iPad Mini”